Looking through early Asylum case notes from 1829, my attention was caught by an unusual entry in the notes for George WATSON a 36 year old married butcher from Attercliffe near Sheffield admitted to the West Riding Pauper Lunatic Asylum on 21st October 1829. He had been ill about one month suffering from only his first attack of mania for which no explanation had been put forward.
The entries in his case notes would have been made by either William Ellis, Asylum Superintendent or one of the visiting physicians. Here is what was being said about George.


Bowels regular. Temper extremely irritable and implacable. Habits previous to the attack extremely temperate but since it has been with great difficulty he has been restrained from the immoderate use of ardent spirits. Has shown no tendency to suicide, has been bled with Blisters and Cathartics.
23rd October 1829. Has been very maniacal and has gnawed two of the thick leather straps thro’ which fasten the Sleeves. Head hot bowels costive. Let his head be covered with a wet cloth. Low diet.


30th October 1829. Better in every respect.
4th November 1829. Continues to improve but still rambles in his mind.


9th November 1829. Is much better again. His head and face which were flushed and very hot are quite settled and cool again. Bowels open.
10th November 1829. Has been on low diet the last few days and he now seems a good deal reduced in strength. His pulse is quick and irritable. Seems quieter.


Let him have some good broth twice or three times a day.


For the next few weeks George was monitored and treated with medicines: magnesium sulphate, hyoscyamine, antimony, camphor. He was to have a cold shower bath every second Monday. 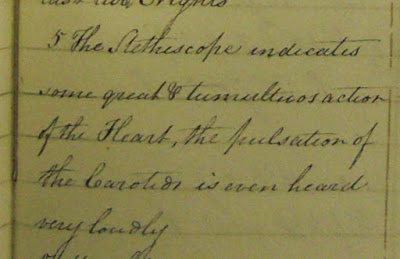 5th December 1829. The Stethoscope indicates some great and tumultuous action of the Heart, the pulsation of the Corotid is even heard very loudly.
It was the use of “The Stethoscope” which surprised me as today we would probably refer to “a stethoscope” given that one is carried around by most physicians. Is there perhaps some element of surprise and wonder conveyed in “the pulsation of the Corotid is even heard very loudly”?
Some research into the history of the stethoscope was needed so I turned to the web. Wikipedia explains that Rene Laennec at the Necker-Enfants Malades Hospital in Paris had been the first to realise that a hollow tube could be used to listen to heart and lung sounds rather than placing his ear against the patient’s body. By 1819 he had machined a hollow wooden tube with a small hole at one end and a conical hollow at the other. He named this instrument stetho + scope, meaning “chest scope”.
Ten years later, perhaps William Ellis had only recently obtained one of these new instruments and it was being used on George WATSON for what is certainly the first time recorded in any of the Asylum case books.

Over the next few months George was bled and  steamed with the hot air machine till he got into a perspiration. Opiate pills were tried to help him sleep but to no effect. Tincture of digitalis was prescribed, discontinued in early February.

9th February 1830. Is purged from the Digitalis pulse only 84 and much less full.

The tincture of digitalis was prescribed again in early March. By mid March George had begun to suffer from oedema for which pulverised jalap was prescribed.

19th March 1830. He sat up yesterday upon which the swelling reappeared in lower extremities to considerable extent.

The same medicines continued to be prescribed. It is notable that since 6th November the previous year his case notes hold no mention of his mania and the physicians were focussed on treating George's physical symptoms. His spell in the Asylum ended on 8th April 1830 when he was discharged into the care of his family. Nothing further is known about George.

Posted by David Scrimgeour at 00:09