How Patients Were "Sectioned" in Early 19th Century Yorkshire

The West Riding Pauper Lunatic Asylum in Wakefield opened for the admission of its first patients in late 1818. At that time, to have a person committed to the Asylum the Overseer of the Poor of a township produced to one of His Majesty’s Justices of the Peace (JP) a certificate in writing from a Medical Person – Physician, Surgeon or Apothecary - that an individual being a lunatic pauper, belonging to the said township was “dangerous and not fit to go at large, and a proper object to be admitted into the Asylum”. The JP, presumably satisfied by the evidence in front of him, would then authorise the committal, signing and sealing a Reception Order. Today we would call that being “sectioned”.
Within the vast array of records held by West Yorkshire Archive Service (WYAS) there are bundles of the original Reception Orders which are often a small “file” of legal paperwork authorising and ordering the committal of a person to the Asylum. Researchers can expect to find medical certificates, magistrates’ orders and patient details in each “file”, often on a multi-page pre-printed form but sometimes loosely held together. 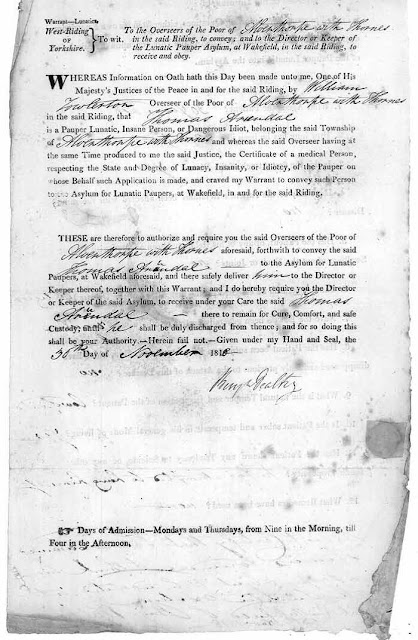 The WYAS collection of Reception Orders for the period 1818–1868 is nearly complete, with the exception of orders for 1837-1839 and 1848-1852. Some of the missing documents are present in the collection of the Mental Health Museum, Fieldhead, Wakefield but unfortunately others have disappeared into the hands of persons unknown.


The content and format of Reception Orders evolved through time reflecting changes in the law governing the conduct and administration of the asylums and the committal of persons to those asylums. They tell the story of the evolution of medical treatment of the insane outside the Asylum, the rise in admission numbers as the Asylum became recognised as the most appropriate place of safety, the interaction between Asylum authorities and those providing local provision for the insane poor and many other aspects of social history.
Reception Orders even provide glimpses of the attitudes of officials who, before the opening of the Asylum, had responsibility for the care of the mentally ill poor. In response to the question ”What remedies have been used?” ahead of the admission of Joseph BAXTER from Aston cum Aughton in 1819, JP William Alderson wrote:
"We have reason to believe that a Whip would be the best remedy, for he used to work regularly until he was removed into the Poor House about a year and half ago, since which time he has done nothing."
Today, one might expect that such important legal documentation capable of curtailing the freedom of an individual, frequently against their will, would have had to have been completed in full in a thorough and timely manner but in the early 19th century that was certainly not always the case. A distinct lack of thoroughness can be seen in the level of completion of many of the early Reception Orders. The worst examples provide little more than the name and abode of the pauper and which parish or township would be paying for their confinement in the Asylum.
One gets a sense of almost indecent haste in the admission of many pauper lunatics. Checking dates it quickly becomes clear that many Reception Orders or medical certificates accompanying them were only authorised after the patient had been “admitted”. Even that is eclipsed by the fact that for Mary IBBERSON and Lydia WHITTAM, admitted in 1826 and 1828 respectively, the numbering system used in the files tells us that no reception order was ever received.
In many instances, the medical certificate was simply overlooked, whether accidentally or deliberately. Revisiting the reception order for Joseph BAXTER you will find that William Alderson, JP also stated:
"I have not thought it necessary to apply to a Surgeon as Baxter’s case is so well known."
So although the process required production of a medical certificate, a blind eye was turned to this absence. One cannot imagine that happening today.
Within the WYAS collection will be found a cornucopia of different styles and colours of reception paperwork, to varying levels of completeness. Change in legislation seems to have been the key driver for the emergence of new styles, but it is very clear that the poor law authorities, with an eye on the public purse, wanted to use up remaining stocks of older forms before adopting the latest style. This was Yorkshire after all.
Styles of Reception Order accepted by the Asylum varied considerably. Some townships, for example, Leeds and Sheffield, went to the lengths of having their own customised forms printed, perhaps in anticipation of lots of form filling to come. Other townships, presumably without access to pre-printed forms, penned the JPs’ orders in full. At least one patient, William HARRISON of Mitton, was admitted when the JPs used a form pre-printed for use in committing persons to the County Lunatic Asylum at Lancaster.
One Reception Order from 1844 is even nameless as the man found wandering in Huddersfield, refused to provide his name. In contrast, properly completed documents provided a wealth of background for the medical staff at the Asylum, and so also for today’s researcher.

PS. Joseph BAXTER was never whipped in the Asylum. He passed away there on 4th November 1828.

Posted by David Scrimgeour at 02:48